Town Criers used to share the news of the day; these days they’re the ones making news.

Squire Frederick has been seen and/or heard in a variety of print, broadcast, and online outlets during his more than two decades of colonial work.

(See samples below. Click on the bold text to see the original articles.)

1430 Connection – Squire Frederick was a guest on the WNAV program 1430 connection in December 2017.

The Annapolis Podcast – Squire Frederick made a guest appearance on the podcast in August 2015.

“Fred Taylor — known as Squire Frederick when he cries — is one of the newer criers, getting the OK from the mayor’s office in Annapolis, Md., in 2006. The 66-year-old widower previously worked for the Department of Defense. Now in retirement, he spends his free time announcing just-married couples and welcoming legislators back to session. ‘It just kind of puts a smile on people’s faces,’ he said.” 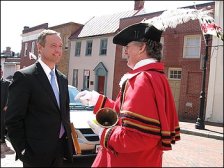 To one passerby wearing sandals, he says, “Perhaps you could get a man to buy you a proper pair of shoes.”

To an out-of-towner requesting directions to Francis Street (naturally, while standing under a Francis Street sign), he says “if you were any closer it would bite you.”

Taylor describes himself as “historical eye candy” and, in June, will compete against 39 others from nine countries in the World Town Crier Tournament in Chester, England.”

“His appointment began June 1 and allows him access to the city’s official ringing bell – a gift from Annapolis‘ sister city, Annapolis Royale in Nova Scotia. He’s also become a member of the American Guild of Town Criers, making him eligible for crying competitions.

“But for our money, the highlight comes on May 3, when the National Town Crier Championships get underway. Official criers dressed in period costumes will wax poetic about their hometowns and the tercentennial anniversary to win cash prizes. Annapolis’ official town crier, Squire Frederick – aka Fred Taylor, a former employee of the Department of Defense – will host the competition. Now that’s something worth shouting about.”

Newsday included Squire Frederick in an article about visiting Annapolis.

Sykesville Online featured “An Interview with Squire Frederick” on Jan. 18, 2011.

Annapolis, What’s Up? magazine included Squire Frederick in an article about Charterfest.